"Late but very welcome recognition," a gratified GM Keith R. Kernspecht thought as he opened the large envelope from Hong Kong. It contained a brand-new certificate appointing him a 10th Level Grandmaster of Leung Ting WingTsun. 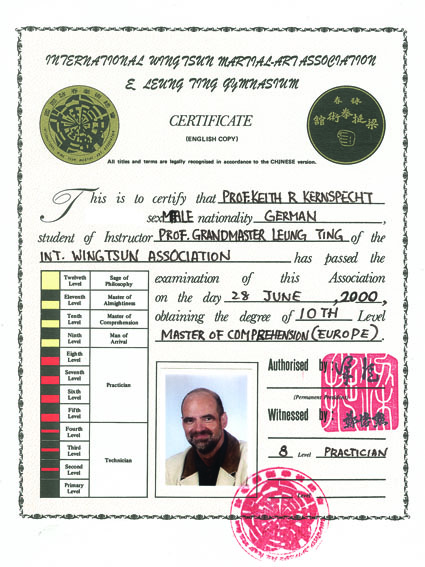 Many might ask where the "recognition" factor comes in, knowing that Prof. Kernspecht already received a certificate confirming his 10th Level MOC from his SiFu Leung Ting in 2000, i.e.15 years ago and as the first before any of the Chinese students.
Well, because this hand-written certificate bore the addition "(Europe)". Grandmaster Leung Ting added this strange restriction to Prof. Kernspecht's 10th Level to safeguard his own sole right to teach outside Europe, and especially in the USA. This geographical restriction was to apply at least until GM Kernspecht's 60th birthday, or until SiFu Leung Ting decided to enter retirement. That time came in 2008, though nobody then thought about issuing a new certificate with no restriction.
Between 2000 and 2015, i.e. for 15 years, GM Kernspecht did not rest on his laurels but rather developed his understanding of WingTsun further towards the principle-based, Inner WingTsun (WT) his SiFu had always propounded. 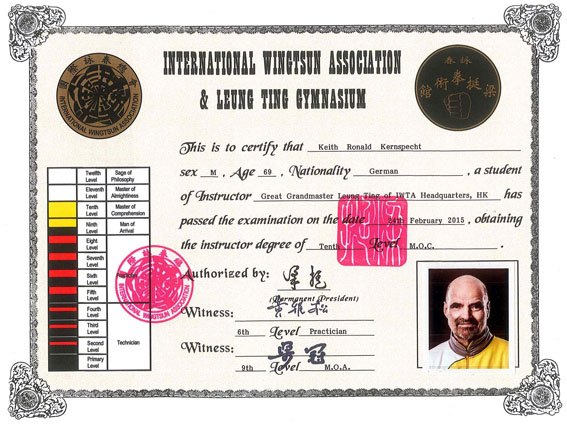 And now this welcome recognition had come from China in the form of a certificate for the 10th Level – but without the geographical restriction to "Europe"*.

Today as in 2000, this makes GM Kernspecht the only student of Grandmaster Leung Ting to hold the 10th Grandmaster Level. (See Essence of WingTsun, p. 49)

* Footnote: All the same, there is no intention on the part of either GM Kernspecht
or the EWTO to expand outside the European homeland.