And now he is a professor

On 7th May GM Oliver König was awarded the title of “Professor emeritus“ by the State University of Plovdiv/Bulgaria in recognition of his achievements in the dissemination of the eastern martial arts –specifically WingTsun – and for his contribution to giving martial arts academic status. 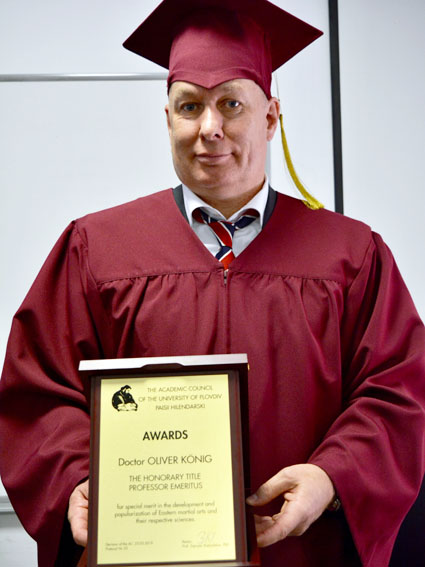 König (King) by surname, Doctor of Sport Science since 2011, 9th Level Grandmaster since 2015 and now Professor Emeritus at the Paissij-Hilendarski University in Plovdiv: WingTsun Grandmaster Prof. em. Dr. Oliver König. Here are some of the stages on the way to this achievement.

Even in his youth, Oliver König had two great dreams that appeared to irreconcilable at the time: firstly an academic career with the aim of obtaining at least a doctorate, and secondly to become a master in the martial art of Bruce Lee.

Life duly obliged him, and he met the founder of the EWTO, Keith R. Kernspecht, who became his teacher and mentor. He began to learn WingTsun, and high academic honours were forgotten for the present.

He started with an intensive WingTsun training course at Langenzell Castle, and set himself personal goals in the martial arts: WingTsun teacher, a large WingTsun school in Vienna, WingTsun master. Today he is a WingTsun grandmaster (MOA – Man of Arrival).

Holding an academic degree or a comparable level of education is a precondition for becoming a grandmaster, so the second great dream of his youth once again became the focus of his attention: studying at a university. But what? Martial arts? And where?

Fortunately his mentor Grandmaster Kernspecht had a similar dream, namely to place WingTsun on an academic footing. To this end he had already made and maintained early contacts. In 1996 the University in Plovdiv/Bulgaria showed great interest and invited GM Kernspecht and a team which also included Oliver König to Plovdiv. Even at that time, the university offered courses of study giving students well-founded knowledge of the martial sports and arts. The idea of organising a course of study in martial arts together with the EWTO was already discussed.

Once all the bureaucratic obstacles had been overcome, this visit eventually gave rise to a course of university study for a Bachelor degree in “Sports Education specialising in WingTsun”. The first course of study began in 2004.

The participants also included DaiSifu Oliver König. After four years he received his Bachelor degree, and he completed his Master degree in Sports Education one year later. His comment at the time: “It was a wonderful time in which I was a student in sports education while being able to deepen my knowledge of WingTsun as well. I cannot thank my SiFu, GM Kernspecht, enough for this.“ However, he was not just a student during this time, but also worked intensively behind the scenes to implement the academic programme.

Completion of his studies was not the end of his academic training. He continued to work closely with the Dean of Plovdiv University and Prof. Margaritov to organise further courses of study for EWTO members, resulting in two more master courses in martial arts. In parallel with this, the EWTO entered into cooperation with the University of Derby in Buxton, England, where EWTO students were able to take a three-year degree course for Bachelor of Martials Arts. König was an Associated Lecturer for this course of study.

His own further education culminated in his dissertation on the subject of “Psycho-physical preparation in  WingTsun instruction“ under the scientific guidance of Prof. Margaritov at the Paissij-Hilendarski University. In 2011 he was awarded his doctorate in Sporting Sciences for this. His academic dream had come true.

Afterwards, König was by no means content to rest on his laurels. As the education officer of the EWTO, he continued to concern himself with the academic training of WingTsun students.

During the years after taking his Master degree, he also developed a programme for the further training of EWTO instructors and teachers: the Leadership programme. This programme makes a major contribution towards improving and assuring the quality of training for WingTsun students, and is constantly adapted to the needs of professional school management.

Another project dear to DaiSifu König’s heart was to create a teaching programme that closes the groundfighting gap in WingTsun. Together with his colleague and friend DaiSifu Thomas Schrön, he developed the BlitzFight programme which became a department of its own within the EWTO in 2016.

Prior to this, in 2015, Dr. König had been made a grandmaster of WingTsun. So was that the end of his career ladder? No, as became apparent early this month: in recognition of his services to academic study of the martial arts, he was awarded the title of “Professor emeritus“ by the Paissij-Hilendarski University in Plovdiv.

We want to take this opportunity to join the long list of those offering their heartfelt congratulations, and wish him continued success and creative energy for the future in WingTsun, the EWTO and the academic world.

PS:
Incidentally, Prof. em. Dr. Oliver König has not remained idle in Bulgaria, and has immediately put the case for a further course of study in the martial arts. This is to start next year. Those interested can already enter their names in a list at head office without obligation. They will receive notification as soon as specific registration data, timetables and costs are available, and can then register for a place on the course. A detailed report on the subject will shortly appear in WTW online.